To crop or not to crop after the picture is taken?

Henri Cartier-Bresson famously did not amend his original in camera choices of picture design or allow others to print his pictures other than full frame as shot.

This post shows three crops from the same file.

An alternative is the crop shown on the left. A similar idea to the choice above but the clock in the background is replaced by the figure of a man on the right hand side of the frame. The Feature image works better for me because the visual tension and pull of the light toned clock is stronger than the silhouette of the man. 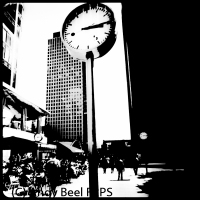 The next alternative omits the girl on the LHS and the visual balance is completed by the two clocks in the background. As the clock on the LHS is light tone with a light tone background th contrast is not so great therefore the effect is slightly weaken.

Human interest in a picture has more interest generally than inanimate objects.

Last below the fully frame from which all three crops were taken.

Pre-visualisation is much talked about but for the past 30 years I have shot tightly cropped pictures intuitively and then deciding if a different or stronger picture is available from the file or negative.

I came across this picture taken in 1985 whilst recycling print mounts. The original expression was low contrast on matt paper. I tend to think the current interpretation is much stronger and arresting to the eye.